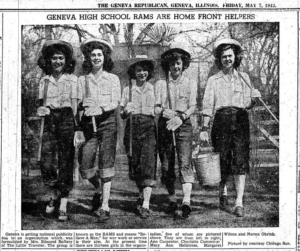 (Headline from The Geneva Republican Newspaper, May 7, 1943)

Geneva is getting national publicity due to an organization which was formulated by Mrs. Edmond Raftery of The Little Traveler. The groups is known as the RAMS and means “Relieve A Man,” for war work or service is their aim. At the present time there are thirteen girls in the organization, five of whom are pictured above. They are from left to right: Ann Carpenter, Charlotte Cummings, Mary Ann Hellstrom, Margaret Wilcox and Norma Obrink.

Organized directly under the supervision of Mrs. Mary Noelting who represents the Man Power Commission, United States Employment Service operations department of this area are a group of Geneva girls known as the RAMS. Translated this means “Relieve A Man” for war work or service is their aim.

Mrs. Edmond Raftery of The Little Traveler is sponsor of the group and it was through her efforts that the girls were organized for the purpose of mowing and raking yards, trimming bushes and shrubs, taking care of flowers and gardens, wash windows, put up screens, painting and other odd jobs which were formerly done by men who are now engaged in the war effort. Mrs. Raftery presented each of the girls with their insignia which is the letters RAM inscribed in red on white felt.

Each girl in the organization is registered with the United States Employment Service and had to have a permit from her parents and school in order to do the work. They each were presented with an identification card from the government.

Anyone desiring to have any work done may call The Little Traveler, Geneva 3200, and they can be assured that the girls will respond promptly and do the work efficiently.