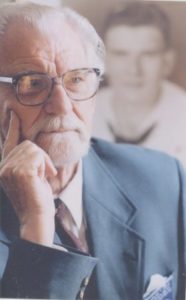 In honor of Memorial Day, this article from the Museum’s archives was written by Charles T. Sehe, who grew up in Geneva, enlisted in the US Navy and survived the attack on Pearl Harbor, December 7, 1941.

I do not need Memorial Day or Veteran’s Day observances to remind me of how war changes Veteran’s lives forever in painful ways – a spiritual voice within my mind keeps whispering a disturbing thought – why me?

Why didn’t I die?  Why did I survive the war when so many others didn’t?  I do not know the answer to my questions. I may never know in my lifetime.

Listed are the traumatic events in the order in which they occurred on December 7, 1941 with time slots obtained from the USS Nevada’s log…

07:56 hrs. USS Nevada’s Marine Color Guard and the band musicians assembling on main deck to await the 8 o’clock signal to hoist colors as the National Anthem is played. With sudden fury, the first wave of attacking Japanese planes without any warning swept over the U.S. military air fields.

07:58 hrs. Nevada’s gun crews now were racing to their battle stations, but the Color Guard and the band musicians held fast until the last note of the Anthem was played, then, scurried to their designated battle stations.

08:05 hrs. Low-level torpedo planes coming in from the southwest crossed overhead with another flight of the high level and dive bombers. One torpedo exploded on the port side hull between turrets one and two.  The explosion caused a violent lurching upwards of our ship with vibrant shuddering before slamming back on the water.

08.09 hrs. Violent explosions shattered the forecastle of the Arizona, leaving its foremast, navigation and signal bridges a twisted smoldering hulk.  A  huge column of blast furnace red heat shot upwards several hundreds of feet.  The shockwaves generated by the explosions reached Nevada’s open decks and those of us on the topside felt the heat generated by the blast.

08.10 hrs. Harbor authorities gives order for the battleships to get underway.  In spite of her gaping torpedo wound, the Nevada was the only major warship to respond to the order.  Other battleships lay still moored, stricken and burning.

08.30 hrs. The Nevada slowly moved away from its mooring and passed the twisted burning hulk of the Arizona and the overturned Oklahoma, which entombed many of its crew.

08.30 – 09.00 hrs. An uneasy lull for about twenty minutes followed that strafing and bombing attacks on our ship.  An urgent call came throughout the ship “All Hands, not engaged in air defense or handling of ammunition, leave your station, and turn to fighting the uncontrolled blazes.”  I don’t remember how I had descended from the searchlight platform, but my arms and legs had bruises and deep scratches when I reached the main deck.

09.00 hrs. High level bombers appeared again and concentrated on the slow moving Nevada, determined to sink her in the channel, thereby blocking the exits for ships.  More fires erupt throughout the boat deck and the ships gallery.

09.25 hrs. Nevada’s fire and boiler rooms were beginning to flood, with noxious fumes forming.  Soon, all electrical power was lost, plunging the ship into total darkness.  The AA guns on the boat deck became silent.  Our fire hoses went limp.

10.00 hrs. As preparations were made to secure anchor, at least seven enemy planes swarmed overhead.  We were bombed, strafed, again adding new fires to the already stricken Nevada.

10.30 hrs. As we were passing by a dry dock, the destroyer Shaw exploded violently showering the Nevada with a blanket of burning debris and twisted metal.  By 10.32 hours it was all over.  The Nevada was deliberately rammed into the muddied bank ashore from Hospital Point.

10.45 hrs. All available personnel from each of the deck divisions commenced searching in their compartments and gun casements for wounded and dead shipmates.  All of the casualties were identified (best as possible) and tagged for injuries, and later transferred by launches to military hospitals or to the navy hospital ship, the Solace.

13.30 hrs. Remainder of the day: foraging teams continue to search throughout the twisted masses of metal fragments and shredded bulkheads splattered with blood to leave no space unturned, as body fragments are carefully extracted from smoldering debris.  I found fragmented portions of arms, leg and knee joints all unidentifiable because of their blackened burned conditions.  We were given unused steel buckets to collect the fragmented body parts.

07.00 hrs. Monday morning, December 8, Yard personnel accompanied by naval officers boarded the Nevada to assess its extensive damage and its salvage possibility.  Meanwhile, many of Nevada’s more experienced officers had volunteered or were transferred to other ships.  I, being a Seaman 2/c, was among the 340 crew that remained on the Nevada till war’s end.

This eighteen year old youth, passing from an Age of Innocence to an Age of Complexity and Experience, had been a stunned witness to America’s last moment of Peace and its first moment of War.  The memories yet remain after all of these years.